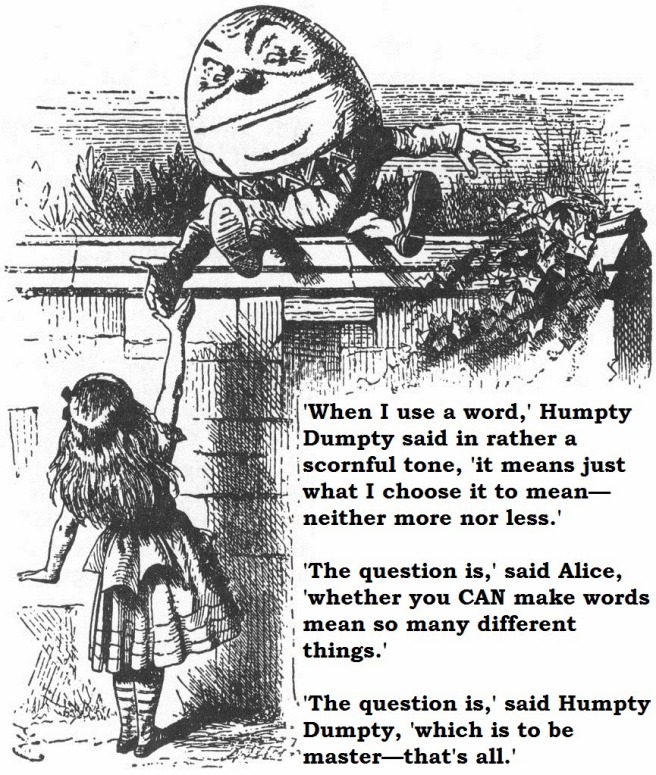 ‘It’s very provoking,’ Humpty Dumpty said after a long silence, looking away from Alice as he spoke, ‘to be called an egg — very!’

‘I said you looked like an egg, Sir,’ Alice gently explained. ‘And some eggs are very pretty, you know,’ she added, hoping to turn her remark into a sort of compliment.

‘Don’t stand chattering to yourself like that,’ Humpty Dumpty said, looking at her for the first time, ‘but tell me your name and your business.’

‘My name is Alice, but I’d rather you called me Jack’

‘That’s a stupid idea!’ Humpty Dumpty interrupted impatiently. ‘You look like an Alice to me.’

‘Must I be one or the other?’ Alice asked doubtfully. ’My teacher says I can be both.’

‘Of course it would,’ Humpty Dumpty said with a short laugh: ‘that is what grown-ups do; they try to manipulate you to their own ends.’

‘Why do you sit out here all alone?’ said Alice, not wishing to begin an argument.

‘Why, because it is conducive to my discovering my true sexual identity!’ cried Humpty Dumpty. ‘Did you think I didn’t know the answer to that? Ask another.’

‘How will you know when you have found it?’, asked Alice, for he was a very philosophical little boy.

‘I shall know,’ said Humpty Dumpty, ‘when I have hatched.’

‘Good gracious!’, exclaimed Jack, who was getting more and more impatient with the gingham dress and pinafore in which Tenniel had dressed her. ‘I couldn’t wait for that. I am going for reassignment surgery.’

‘As you will, ‘sighed Humpty Dumpty. ‘But remember the rhyme.’

‘What rhyme?‘ asked Alice, who had been reared by Nigerian care-workers in a pre-school nursery, and was consequently culturally deprived.

‘Well’, said Humpty, ‘when I hatch, I shall have to break out of my shell, and that will be the end of the matter. No going back. All the King’s horses and all the King’s men, Couldn’t put Humpty together again’.

‘Will it be like that with me?’ wondered Jack, who was beginning to be reconciled to the gingham frock and little black pumps with scarlet bows. After all, she thought, contemplating a vision of Humpty Dumpty in a hundred pieces at the foot of the wall, things might be worse.