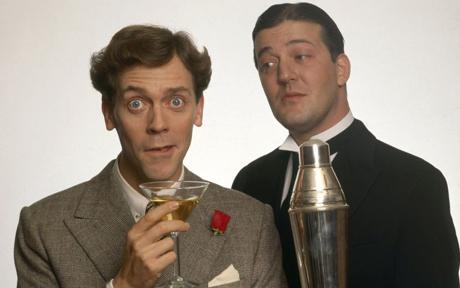 ‘I say, Jeeves,’ said I, putting down a copy of the Church Times which I had inadvertently taken from the library table at Blandings, supposing (mistakenly as it turned out) that it might contain tips for the 11.30 at Wincanton. ‘What do you make of gay bishops?’

‘I have Sir, no hesitation in saying that such a person could not possibly exist.’

It is Jeeves’s usual, habit, I have noticed, to employ a touch of the ontologicals, especially when he is on a sticky wicket.

‘But come on, Jeeves’, I said, ‘it’s down here in black and white in this church paper thingy. The Bishop of Grantham, it says, swings entirely the other way. And what is more, he is shacked up with another pansy. Even the Archbishop of Canterbury knows all about it.’

Jeeves appeared to be unperturbed by this revelation.

‘I have it on good authority, Sir – in confidence from another gentleman’s gentleman, and so bound by the utmost discretion– that though the relationship is close and enduring, there has been no – ermm – well – hanky panky.’

‘I should hope not, Jeeves. But how in the world could the Archbishop of Canterbury know that? Does he move in the same circles as you?’

‘Oh, no Sir, most certainly not. I surmise, therefore, that it was merely a charitable assumption on his part.’

‘Charity my foot!’ I replied irascibly. ‘Either they’re at it or not.’

‘In other circumstances, I would agree, Sir; but these gentlemen, it appears, are in a relationship best described as “theological”.’

‘Poppycock, Jeeves!’ I replied, ‘theology my hat! Isn’t the Bible clear about these things ‘Thou shalt not…’, ‘Caesar’s wife…’ and all that.’ (I was certain of my ground, if a little shaky on the details.)

‘Alas no,’ said Jeeves with an air of effortless superiority. ‘Sir has obviously not grasped the purpose of modern theology, which (as I understand it) is to show that the Bible means the opposite of what it actually says.  It is called the science of hermeneutics.’

‘Homoneutics, did you say? Well I for one am having none of it!’

And with that crushing riposte, I determined to put a fiver on ‘Pride of Killarney’, at 10 to 1 in the  two-thirty.