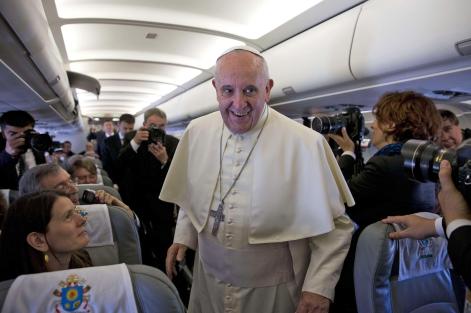 The conclave which was hastily convened after the sudden tragic death of Pope Francis has concluded quickly.

Francis went out in an event which has been seen on video by over two billion people, when law enforcement officers dragged him screaming from a Boeing 747 bound for Mecca, where he was hoping to celebrate Easter.

According to a statement from an airline executive, Francis had refused to take his seat. ‘We can’t have people just standing in the aisle, entertaining other passengers and giving unsolicited media interviews,’ said a spokesperson. Pope Francis fell on the steps of the aircraft, as transport police forcibly removed him.

The new Pope, who emerged after only two hours of deliberation, is Cardinal Robert Sarah, who gave his blessing from the loggia of St Peter’s Basilica this evening. He has taken the name Benedict XVII.

In an interview for German television (which has since been removed from Youtube after a storm of protest), Cardinal Walter Kasper described the election as ‘a black day for the Catholic Church’.