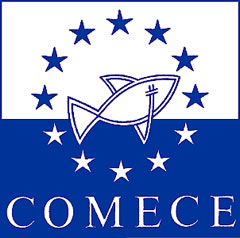 As the relationship between the United Kingdom and the European Union continues to unravel, complications multiply. One which has recently surfaced concerns the Commission of Bishops’ Conferences of the European Community (COMECE) – proprietor one Reinhard Marx.*

The Catholic equivalent of the West Lothian problem can be stated simply: when the UK finally leaves the EU Ireland will continue its membership. In consequence, whilst the Bishops’ Conferences of England and Wales and Scotland will withdraw from COMECE, the Irish will not. Catholics in Northern Ireland will therefore have representation which is denied Catholics in Scotland – despite a Remain vote in both countries.

‘This is not just a problem for the God-botherers,’ said Alec Salmond, veteran campaigner for Scottish independence. ‘This is being hotly disputed on the terraces of Ibrox and Celtic Park. Demands are already being made for a second Independence Referendum so that Scottish Catholics can have the same rights in the EU as their co-religionists across the Irish Sea. Alongside border disputes in County Armagh, this could be big.‘

*Be honest, you didn’t even know that this existed.