Today, in a flurry of publicity, in the impressive setting of Cologne Cathedral, came the long-expected launch of the LOS VON ROM campaign.

Cardinal Reinhard Marx led the team of three (known as ‘The Magi’ – an allusion to the Cathedral’s principal shrine) who will make the case for the withdrawal of the German dioceses from the Catholic Church.

‘We are not just a subsidiary of Rome,’ said Marx. ‘Each episcopal conference is responsible for the pastoral care in their culture and has to proclaim the Gospel in its own unique way. Once every 500 years the case for Germany in the Catholic Church needs to be re-examined from first principles. The time for this generation is now.’

Others spoke of the crippling centralization imposed by an unelected curia. ‘In a democratic age it is intolerable to find ourselves under an absolute monarchy. Such regimes are nowhere to be found in the modern world, except in parts of the former Soviet Union’.

SUBSIDIARITY NOT CENTRALIZATION was the slogan projected in a dazzling laser light show onto the façade of the cathedral.

There was a general feeling that a ‘one-size-fits-all’ ethic was no longer viable in today’s pluriform society. ‘The time has come,’ another speaker claimed, ‘to exit the Single Catechism, and engage in the free market of ideas and values. Just look at the achievements, in the free world, of Protestants and Old Catholics. It’s a brave new world of exciting lifestyle choices. Deuxit can only be good news for German catholics!’

Beyond the Catholic Church, it was claimed, there would also be scope for new and deeper relations with Evangelical Christians of all kinds. ‘Rome has stifled ecumenism. A German Church outside that narrow enclave could pursue new pathways to reconciliation. No longer would we be negotiating with our hands tied behind our backs. Everything would be up for grabs!’

The referendum is scheduled for some time in 2017. 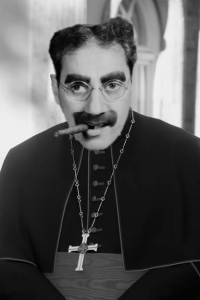 Cardinal Marx gets his point across